The decade of the 1960s is remembered for its fashion excess, sexual liberation and the success of British pop music around the world. Some would say that the ‘Swinging Sixties’ was probably the seminal decade of the century, from the point of view of changing people’s outlook on their own lives. ‘Youth,’ which had arrived in the previous decade, finally found its identity and developed a world of its own in which to live.

© Rob Horlock, “I Remember When I Was Young“.

The 60’s was a melting pot for the new and old, the sweets of the 40’s were still going strong, the 50’s had produces a vast new array of textures and flavours and now it was  time for the 60’s to stamp its mark in the sweetie world. Records are scant, but based on my opening statement it is possible to tell what was around during a particular time by what customers buy and thereby the 60’s selection was made. There are, however, some sweetie classics that the 60’s can own. The Caramac bar, having been invented in 1959, gained momentum and popularity in the 60’s.

Caramac is the brand name for a caramel flavored bar manufactured by Nestlé. Originally it was launched by Mackintosh’s (later Rowntree Mackintosh) in 1959. The name Caramac was derived from the syllabic abbreviation of Caramel and Mackintosh.

Likewise the Drumstick Lolly made by Swizzels Matlow in 1957 gained momentum and popularity in the 60’s. It came about by accident when Trevor Matlow was experimenting with a wrapping machine and poured two flavours into the machine then added a stick – it worked! The Chuppa Chups lolly, known universally by the young and old, owes some of its popularity and iconic status to Salvador Dali who designed the logo in 1969.

While new introductions were being made, some of the oldies were immortalised for ever by television. “Don’t forget the fruit gums Mum!” If you were there you’ll remember The Beatles played their part in immortalising sweeties: George Harrison let slip that Jelly Babies were his favourite sweet. From there on at every concert the Beatles were bombarded with Jelly Babies. Apparently the Jelly Baby also got its belly button in the 60’s!

Sweeties had the Beatles on their side, but Roald Dahl’s contribution for sweetie marketing was massive. With the publication of Charlie and the Chocolate Factory in 1964 sweeties gained a much wider audience. Lickable wallpaper never made it onto the shelves but Rainbow Drops did (but they don’t make you spit in many colours),Luminous Lollies for eating in bed remain a good but as yet undeveloped product. What we do have today is the Willy Wonka brand. The Willy Wonka factory was first started in the late 1950s, when a small family-owned company started Breaker Confections in Chicago. In 1965 Sunmark Companies purchased Breaker Confections. The name was changed to Willy Wonka Brands in 1980, and to Willy Wonka Candy Factory in 1993. In 1988, the Sunmark Companies became part of NESTLÉ.

The 50s was a very exciting decade for sweeties. The war ended in 1945 allowing foreign imports to gradually grace our shores again and sweet rationing came to an end in 1953. Plentiful supplies of exotic imports led to an explosion of tastes and textures in the sweetie world. Coconut, chocolate – you name it, it was back, not to mention the 2 million tons of sugar made available from Cuba. Everything was in place for a sweetie makeover and indulgence to counter the austerity of the war years.

Jelly Babies were back! When invented to celebrate the end of the Great War, they were called Peace Babies. They dissapeared during WWII and came back again in the 50s with the new name of Jelly Babies. I once mentioned to a customer how I felt it was a shame that they were no longer called Peace Babies. Without hesitation she said that it would not be possible to bite the head off a Peace Baby!

Of course, all the old favourites of the 40s kept going but the increased choice of the 50s made sweetie buying a whole new experience. However, sweetie choice was only partly responsible for the new buying experience. ‘Self service’ was born in the early 50s and this marked the beginning of a new shopping concept that would change the way we buy our groceries for ever and lead to the ‘pick & mix’ we love today. We now helped ourselves.

Eye catching packaging and jingles were employed to help sell the ever growing array of products at our disposal. Marketing had arrived! The sweet industry is not one to miss a trick and it took advantage of new technology by advertising Murray Mints during the first ever commercial TV break in 1955

Love Hearts were made in 1954 so all that sweet talk can be traced back to that moment of genius that Swizzles Matlow had. Today over seven million love hearts are made every day with 134 different messages. Flying saucers, although invented in the 40’s, started to gain popularity in the 50’s. Spangles, invented in 1950 and loved by many, became a member of the Sweetie Graveyard list in 1980 due to a perceived decline in sales – can’t be true!! Parma violets, the sweetie we love to hate, were first introduced in 1947 becoming readily available in the 50s.

Love Hearts were made in 1954, so all that sweet talk can be traced back to Swizzles Matlow and that moment of genius. Today over 7,000,000 Love Hearts are made daily, with 134 different messages. Flying saucers, although invented in the 40s, started to gain popularity in the 50s. Spangles, invented in 1950, became a member of the Sweetie Graveyard in 1980 due to a perceived decline in sales – can’t be true!! Parma violets, the sweetie we love to hate, were introduced in 1947 and became readily available in the 50s.

The 50s are remembered for many things as well as sweets. Children skipped and played hopscotch in the streets and sneaked on to old bomb sites to play war. Streets were safer with fewer cars and the phone boxes worked (Press Button A). Television brought the Coronation to the masses in 1953 but it did not get off the ground until the 60s so children continued to rely on toys and the wireless for entertainment. Jacks, tiddlywinks, Meccano, dolls houses, wind up toys and Dinky Toys were must-haves, and Listen With Mother was a date with the old valve radiogram.

Music was having a revolution. Elvis Presley or Chuck Berry might have been played on gramophone records or listened to under the bedclothes. Tuning a matchbox crystal set to Radio Luxembourg or the American Forces Network was the teenagers’ choice.

The diet of the 50s child included sweets bought with ‘old money’ but there was more. Bread and beef dripping, spam fritters washed down with Gold Top milk was considered good healthy eating. Home grown veg. was normal. Meals were serious affairs with no elbows on the table and you had to ask to ‘get down’.

Clothing had a makeover. Cheap jeans (“Tesco Bombers big and strong, for half a sixpence you can’t go wrong”) and itchy ‘home knits’ with leather patches on the elbows were the standard clothing until manmade drip dry fabrics appeared. Then in the late 50s American imports came, transforming teenage fashion and maybe held partly responsible for the social revolution of the 60s.

I make the claim that you can tell someone’s age by the sweets they buy. Observation has told me that people continue to buy the sweets that they were buying at the age of 10 with their pocket money and first bit of independence. Enjoy your sweets! 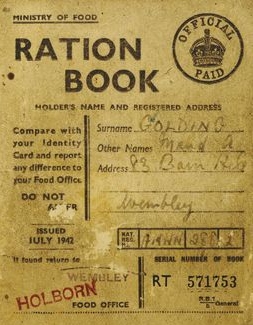 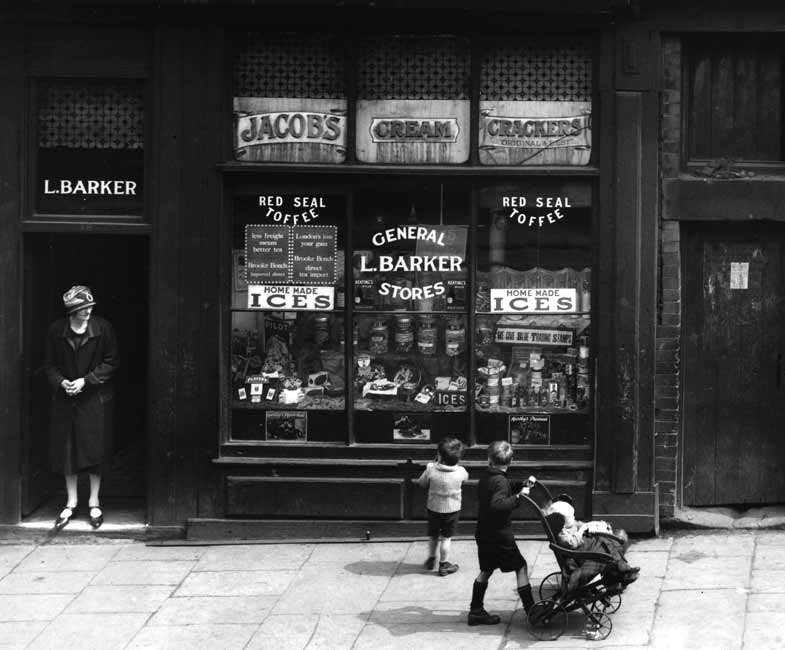 The 1940’s were a time of austerity with the Second World War and Rationing. The sweets that were available were in short supply and flavours and textures were limited to those available here in the UK. There was very little chocolate and coconut but more in the way of flavoured sugar and liquorice. Woolworths tried to buck this trend by importing fudge from the Irish Republic, which being neutral during the war and with a surplus of full cream milk was able to provide some sweetie supplies. Not all sweets were rationed. If it was considered to be medicinal, as in the case of Koff Candy (renamed Cough Candy), your sweetie supply was technically more reliable. The 40’s sweets still form many of the dependable and traditional standbys, with Pontefract Cakes, Jelly Beans and Pear Drops routinely hitting the top 10 despite huge competition from modern tastes and textures.

Many sweetie manufacturers that we know and love today were around in the 40’s, and in some cases a lot earlier. Bassetts were first established in 1842, Greys go as far back as 1826 and Dunhill’s to 1760. Cadbury’s can be traced back to 1824 when John Cadbury started selling tea, coffee and drinking chocolate. By the same token many sweets we are familiar with today go way back. Pontefract Cakes, as we know them, were invented in the early 17th century. Sherbet Fountains were first made in 1925 and Rowntree’s Fruit Gums first hit our taste buds in 1893. Some experts say that Jelly Beans have been around since Roman times and even get a mention in the Bible! True or not, they have a long and distinguished provenance, particularly in America where they were sent to the Union army during the American Civil War in 1861.

I make the claim that you can tell someone’s age by the sweets they buy. Observation tells me that people continue to buy the sweets that they were buying at the age of 10 with their pocket money and first bit of independence. 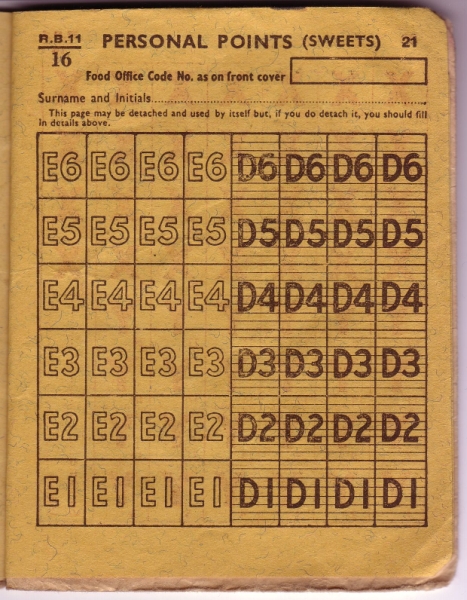 On 26th July 1942 sweets were rationed to 2oz (57g) per week. This changed later that year to 12oz per month until 1946 when it was halved down to 6oz per month. Sweet rationing continued until February 1953.

In July 1942 the Personal Points system was introduced and it applied to sugar-based confectionery. Children did not get a larger share as sweets were not considered as essential, but parents could, of course, share their ration if they wished. The personal points first appeared in a separate booklet but were incorporated into the next food ration book. Personal points also meant that vending machines could no longer contain sweets or chocolate.

All points coupons had to be cut out of the ration book even though the main coupons were now only crossed out; this was so the shop could be allocated fresh supplies based on the number of coupons they collected.